From FountainPen
(Redirected from Paillard)
Jump to: navigation, search
This page is a translated version of the page Paillard and the translation is 100% complete. 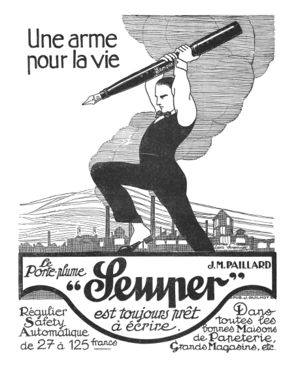 The Paillard origins date back to the 1788 when P. C. Lambertye founded his business in the production of watercolors. The company changed hands several times, first in 1822 and then in 1850, when it became the property of J. M. Paillard, assuming his name. In 1895 Eugene Moreau took over the company, and from 1898 began to move production to Mouy. The company was established as "Société Anonyme des anciens Établissements J. M. Paillard" in 1903.

The transfer of production to Mouy was completed in 1912, but for the production of fountain pens a Paris office is indicated in advertising, Passage St-Sébastien, 17, address that is mentioned also in the patent applications abroad. It is not clear whether it is the head office or a company then split off from the original one. The company was active in the market of fountain pens since the end of World War I to the 60s.

It should be noted that such a Mr. Paillard is cited as responsible representative for France's Montblanc office, it is not clear it is a homonym (most likely), or if it was referring to the firm. The company was also active in the field of stationery, with the production of inks and in cabinet. The first models are pens were American import.

Following fountain pens were produced under two brands, Semper for the top models and Scriptor for the economy segment. At the end of the '30s pens were instead identified directly with the J. M. Paillard name or the abbreviation J.M.P.. The fountain pen production ceased in 1960 but the company continued its activities in the market of writing materials.