From FountainPen
(Redirected from Cap)
Jump to: navigation, search
This page is a translated version of the page Cappuccio and the translation is 100% complete. 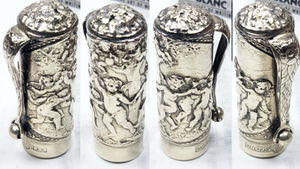 Towards the end of the 1940s, the first snap-action caps began to spread (one of the first companies to use them was the Matador with the Matador-Click model of 1949), which later became very common and still widely used. In this case, the quality of the mechanism is essential to ensure the long-term maintenance of the cap closure. A photo gallery can be found on this page.