From FountainPen
(Redirected from Emegê)
Jump to: navigation, search
This page is a translated version of the page Emegê and the translation is 100% complete.

Emegê imprint on a Magnum

This symbol is engraved on the pens (especially for 100 and 100N models) produced by Pelikan in Portugal since 1935 to at least until the end of the war. The writing was imposed by the general dealer Monteiro Guimarães. The reasons for this label are not known, Dittmer and Lehman in their book attribute it to the fact that finding himself having to endure a great number of reparations pens not sold by him, Guimarães had been able to obtain the use of this specific engraving. 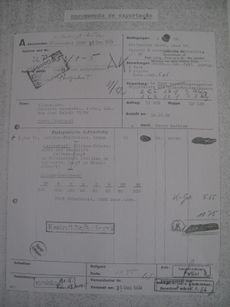 However, as noted by Vasco Pisco in this thread it is not very convincing as Monteiro Guimarãe was the exclusive distributor for Portugal, Spain, Brazil and other Portuguese colonies in Africa, and the legal representative of Pelikan in those countries, so all fountain pens would still be passed by him, and it seems more reasonable to think of commercial reasons and promotion of its own brand.

Although in the past many discussion have been made about the meaning of the acronym, to date the best hypothesis, and the more reasonable even if not directly confirmed by any official document, is that's a simple reference to the Monteiro Guimarães initials, "M" and "G" that in Portuguese are pronounced exactly "eme" and "ge". Whether it was a real official name is, however, confirmed the order shown in the figure on the right, where there is an explicit request from the marking Emegê on the top of the cap.