From FountainPen
(Redirected from Itala Cromograf)
Jump to: navigation, search
This page is a translated version of the page Itala Cromograf and the translation is 100% complete.

Not only a precise date for the birth of this company is not known, but also the allocation of a period is uncertain; there are those who in fact it traces the origins of the '30s. The only certain date from this period is that of the trade mark (Reg. Gen. N. 54492) in 1936 by Filippo Giriodi and Livio Campanelli (which in the absence of better knowledge we assume as founders) and registration of a patent in 1938, as reported in a subsequent French patent (nº FR-840819) of 1939. 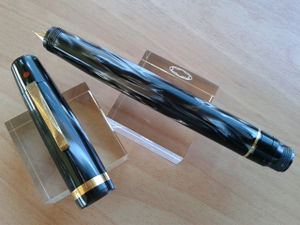 But it seems that, at least from the point of view of the chamber of commerce registration, the date should be moved to the early '40s, since according to L. Jacopini the recording of the "Società anonima vendita penne bicolore Itala Cromograf" took place in Genoa in 1941 and maintained until 1954. It is not clear whether this is a buyer for the production, or a full company, and there are rumors, but without any concrete evidence, that it was created by the Armando Simoni,[1] for the commercialization of the product.

In this case in fact, more than a whole brand, we have a single pen model. Itala produced only one model, called by this name, featuring such as Zerollo a peculiar system of double pens, which, like Zerollo, makes it one of the most technically complex fountain pen that has been ever made. Although there is no official document in this regard, and despite that the brand does not appear in any way, even indirectly, connected to it, is often taken for granted that the production of this pen come from Omas, just on the basis of its technical and aesthetic characteristics.

The Itala in fact contains only an "Itala Cromograf" barrel imprint, also present on the packaging, without any reference to other companies. But has been reported the existence if a double pen produced by Simoni, that's also marked by the red dot found on some Itala, which could suggest some relationship between the two companies, which however, remains purely hypothetical and not supported by any document or evidence.