From FountainPen
(Redirected from Giti)
Jump to: navigation, search
This page is a translated version of the page Giti and the translation is 100% complete. 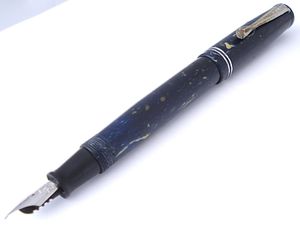 The Giti brand was born in the '30s as a Tibaldi sub-brand, using the initials of the founder Giuseppe Tibaldi. It was the continuation of a production differentiation already present in the 20s with the brand The GTB Pen London, that the company used to market his low-end pens, that however were characterized by an excellent value for money. It's easy to imagine that the reasons for the emergence of the new brand name are due to political changes and the growing of nationalist emphasis from fascist regime, that would make it impractical to maintain the previous mark.

The first Giti pens, called Giti 939, were celluloid models with button filler produced in three sizes: large, medium and small (for ladies). They normally had finishes in chromed metal, and one, two or three cap rings and a drop shaped clip similar to the one mounted on the Infrangibile models of the same period. Being an economic line was a choice of gold plated nibs (called Similoro) or steel nib (called Durium). To these were added the glass spiral nibs.

Pens branded Giti remained in production until the '50s, following the stylistic evolution of the main company models, with simpler clips and adopting ogival lines and the use of piston filler. With the degradation of the Tibaldi production quality, also these pens became less interesting.