From FountainPen
(Redirected from Pen-Co)
Jump to: navigation, search
This page is a translated version of the page Pen-Co and the translation is 100% complete.

The Pen-Co (or simply Penco) brand is the best known brand of the F. R. V. (which stands for Fratelli Rossi Vicenza) a company founded in Sandrigo, a small town located near Vicenza, in 1923, by Rinaldo and Marcello Rossi. The company was founded as Fratelli Rossi - Penne Stilografiche e Materiali Pressati, adopting the Caesar initial brand name (with the logo inscribed on a plaque surmounted by the imperial eagle), clearly inspired by the climate established by the Fascist regime propaganda. 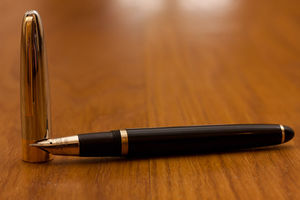 The production of the '30s was aimed at the lower end of the market, with button filler fountain pens produced mainly in black celluloid, but quality was still acceptable. The pens were generally identifiable by the words F.R.V. engraved on the barrel and on the nib. The company, however, also marketed parts and production on demand models, and because his nibs had a good quality/price ratio often happen to find them mounted on other pens.

After the war the nationalist autarchy emphasis of the fascist regime ended, so the company changed its name to Pen-Co, short for Pen Company Manufacturer, producing pens in three different marks: Palladium , Diplomat and Pen-Co, directed respectively to the lower, medium and high-end. The former were pens that reflected the traditional style, produced with lower quality materials. The intermediate brand included a single size pen with traditional lines and mid-level finishes, while Pen-Co were clearly inspired by the US market trends, with a short clip in military style and very slender lines. 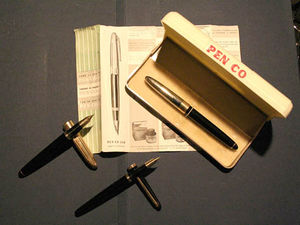 The most famous models, however, are those of the 50s, some clear imitation of the Sheaffer Triumph models, with nib conical, tapering lines and Crest style metal cap. The Pen-Co 53 was the top model, widely publicized, so much to arouse the reaction of the Sheaffer Italian distributor.

But in addition to the conical nib version, although much less common, and virtually unknown until recently, Pen-Co also produced variants with ordinary open nib, like the one shown in the photo at left, as Sheaffer had done with Admiral or Saratoga.

Despite attempts to stay afloat in an increasingly reduced market, taken by the emergence of disposable ballpoint pens, the company found itself in increasingly difficult economic activities and finally closed in the late 50's, March 30, 1957.