From FountainPen
(Redirected from Asco)
Jump to: navigation, search
This page is a translated version of the page Asco and the translation is 100% complete. 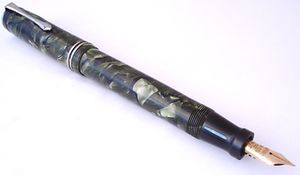 ASCO began as an Aurora sub-brand in 1929, more or less simultaneously with the sister Olo and with the release of the Duplex celluloid model. The new sub-brand, an abbreviation of the name "Advertising Service Company", was born in the offer diversification strategy adopted to cover the market of company promotional objects, dedicated to the production of advertising pens. In reality, ASCO fountain pens had a much wider spread, going to cover the lower end of the market and the distribution via illustrated catalogs.

As for Olo also ASCO began as a brand completely independent of Aurora, but contrary to it, it always continued to remain so. The ASCO pens marketing was in fact entrusted to the "Agenzia Supera", which operated independently having its own headquarters in Turin, in Galleria Umberto I.

The choice of an English name, which was confirmed also by the engravings in English on the pen body, was trying to capture (as other Italian companies did in the same period) the public interest in a product that initially entered Italy as an imported product. In addition, the name itself recalled advertising services, which was the market segment addressed by the ASCO production.

The ASCO production was still directed to the budget end, in an attempt to realize an economic pen able to reach the general public, providing a common object and not a luxury one. This was ensured through mail order catalogs in a monthly edition, and also through the so-called propagandists, essentially the same buyers that were turned into agents with incentives in the form of pens tribute based on the sold volume.

The ASCO production is very diverse and difficult to classify despite the sale catalogs, since the monthly publication did not cover all the possible models. In general, however, these models reflect their Aurora analogous in the same period. The initial models are basically safety identical to A.R.A. 3, but branded with the ASCO logo (a horizontal lozenge containing the words A.S.CO.) And the terms Fountain Pen and Trade Mark reported on two lines respectively to the two sides.

Next models were lever filler or button filler, produced in the red, green, blue and black colors. These pens are very similar to the Duplex, in particular the lever filler one in which the lever is identical to the Duplex one except for the absence of inscriptions. The models were produced in two sizes, large and medium, known as Senior and Junior for lever versions and as Businnes and Standard for button filler models.

In the first half of the '30s (at least since 1933, since they appear in this brochure) was introduced a new line of button filler pens, with streamlined lines and conical shape back and head, produced both in marbled and solid color celluloid. These models were ever produced in two sizes, large and medium referred respectively as Modern 23 and Electa 21. These were joined, in the second half of the 30s, by lower quality models produced from celluloid pipes in a variety of marbled colors.

The ASCO production was discontinued in the mid 30s. Although it was aimed at the marked lower end, the pens build quality and materials were excellent, so that some people say that the ASCO, rather than a sub-brand, should be considered as a independent line production.