From FountainPen
(Redirected from Fermaglio)
Jump to: navigation, search
This page is a translated version of the page Fermaglio and the translation is 100% complete. 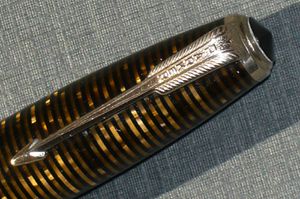 Although the first fountain pens were not equipped with a clip and there are for example suitable pocket cases for the same (they are very typical of the Swan) the use of the clip (usually placed on the cap) has quickly established itself as an essential element to allow a simple attachment of the pen to the pocket of the shirt or jacket, becoming one of the most relevant components, present on the vast majority of pens.

In addition to the first older models, when the use of the clasp was not yet established, are generally an exception to its omnipresence pens for women, with a ring and chain to be worn as a necklace, or handbag pens to be kept in a pocket of the same, usually small size. Another exception are the desk pens, which do not use it being positioned in their housing on the base.

As for the other elements that make up a fountain pen, the clip became very soon a distinctive element of the pen, often going beyond its strict technical meaning to become a stylistic reference, such as the Parker arrow clip, still today a distinctive element of the company, or the shape that recalls the pelican beak used by the Pelikan. Not to mention indirect stylistic requirements, such as those imposed by the military regulations of the American army, which prohibiting the protrusion of the pen from the pocket have resulted in a particular conformation of the same.

But if in the history of the fountain pen the clip has distinguished itself mainly as a stylistic element, it has also played a not insignificant role on the technical level, starting from the various methods of assembling it (such as the washer mounting), or the measures to facilitate its introduction in the pocket (the Roller Clip of the Eversharp), to block the screwing of the cap (the Lox-Top of the Chilton) or to block the clip on the jacket (the hook clip of the Novum). A photo gallery can be found on this page.