From FountainPen
(Redirected from KWG)
Jump to: navigation, search
This page is a translated version of the page KWG and the translation is 100% complete. 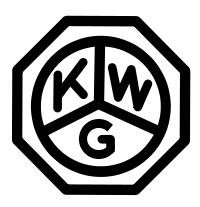 The KWG is a little-known company whose history is closely linked to the Kaweco one, indeed, it worked with this name only for a few years, until 1929, when it acquired the more famous Kaweco, who just went bankruptcy. Since that time the company used the Kaweco brand for all its production and for this reason since 1929 it is essentially identified with this name.

Given the short period of activity KWG branded pens are quite rare, since after the acquisition of the Kaweco the original brand disappeared completely from the market. They still were good quality pens even if they were geared towards the economy market segment and today for their scarcity are of great interest to collectors.

The KWG was founded on January 1, 1925 by Frederik Grube, Heinrich Woringen and J. Knust in Wiesloch, a small town near Heidelberg, with the name of Badische Federhalterfabrik Knust, Woringen & Grube. The company, best known for the logo which reported the initials of the founders, KWG, began a fountain pens production aiming to keep an economic price range, and the first models had much lower prices than the competition (around 40% with respect to Kaweco, Soennecken and Montblanc).

The first company pens were sold in shopping malls under the brand Arumia, and were presented in various versions (Real, Liga, Supra e Spezial). The company obtained a good success selling over 20,000 units in the first year. In 1927 the company introduced some new models, particularly noteworthy was the Arumia Original, a button filler, also made in celluloid, very similar to the Duofold, which was guaranteed for 5 years. In the same year was also created a new line of safety fountain pens, the Colleg in the economy segment addressed to students that also was a great success, multiplying by six times the production since the beginning of the 1926.

In 1928 were resolved disputes with Parker for the use of button filler, and were introduced four new celluloid models in for the Arumia Original "U" series, where had been used a letter "U" in the absence of a better brand, probably to indicate the initial for unbreakable. Was also introduced a new line, the Arumia Meisterklasse, more expensive. New models met with great success and at the end of the year the plants were operating at full capacity, and barely able to meet the demands.

In 1929 KWG was looking for a trademark that would replace the unattractive Arumia, and started contacts with Max Sauter, the Kaweco liquidator. After months of negotiations in September 31, 1929, KWG bought the brand and changed its name to Kaweco Badische Füllhalterfabrik, Woringen & Grube.

From that moment on the KWG brand was completely abandoned, the button filler Arumia models of the "U" series were Kaweco rebranded as Kaweco Meisterklasse, in the same colors. The line Colleg was maintained as Colleg-Extra and became a real line of cheaper products, aimed for use at school. The company continued its activities as Kaweco.