From FountainPen
(Redirected from Dunn)
Jump to: navigation, search
This page is a translated version of the page Dunn and the translation is 100% complete.

The Dunn was founded in 1921, and was one of the many manufacturers born in the golden age of the American fountain pen, when virtually every company was founded on the basis of the invention of some technical innovation. In the case of Dunn, the invention that gave life to the company was the filling mechanism, which, due to its effectiveness, allowed it to obtain good market shares.

But Dunn life was very short, the company closed its doors in 1924 for the first time, and definitively in 1927, after an attempt to relaunch it unfortunately failed. In its short life however Dunn produced good quality and robust fountain pens, equipped with an efficient and advanced filling system that was years ahead to those of its competitors. 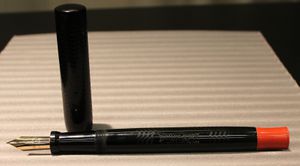 The Dunn was founded in New York in 1921 with headquarters at 300 Madison Avenue, but among its founders does not figure directly Charles Dunn, the inventor from whom the company takes its name, which seems to have died of tuberculosis shortly before the foundation of the company. It was him that in 1920 created and patented (Patent nº US-1359880) an original pump filling system almost identical to the one used by OMAS for the Lucens more than 10 years later. The new filling system allowed to store a large ink capacity, so that one of the slogans adopted for the market launch the Camel Tatler model was: "A regular camel for ink, goes a month without a drink". 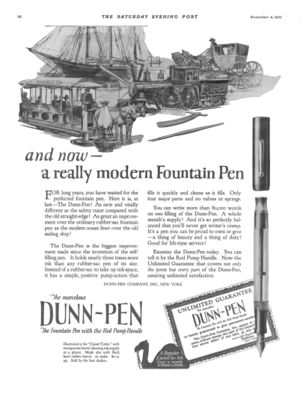 Advertising of 1922, with the slogan A regular camel for ink, goes a month without a drink

All Dunn fountain pens were produced using this particular filling system, which also characterized their style; the back of the pen, used as a knob of the pump filling system was carried out in red plastic (initially in hard rubber, then replaced by casein, a perishable and lower quality material), so it formed a distinctive feature of the pen, that in another slogan was described as "The fountain pen with the red pump handle". A series of models of different sizes were produced, named (in size increasing order): Hummingbird, Camel and Baby Camel, Senior and Senior Jr., Society and Society Jr., Majority and Majority Jr., and the Dreadnaught series with the distinctive openable cap and the Tattler and Tattler Jr. with transparent barrel.

The Dunn pens were primarily hard rubber made; and the company distinguished itself with an extensive advertising campaign. The pump mechanism was simple and robust, and pens were produced in a variety of models from small ladies pens (the Hummingbird) to the giant Tanks model, which is sometimes called Dreadnaught by collectors, although this name rather distinguishes a series that was also produced in ordinary sizes, characterized by caps composed of two parts (another interesting technical innovation, covered by the patent nº US-1596722) whose upper section could be unscrewed to reveal the nib but leaving it protected by a protective cage, so you can fill the pen without pressing the nib dangerously on the bottom of the ink bottle.

In addition to black hard rubber, Dunn produced pens with transparent barrel; these were initially made in bakelite and later in celluloid. This feature allowed it to boast (rightly) to be the only transparent pen (in the ads showing the model called Camel Tatler) to display the ink level, and this well 10 years before the Vacumatic. Are also known to exists, but to be very rare, some metal overlay pens.

The end of the company is not very clear, someone report a bankruptcy in 1924 caused by a prolonged strike of all the employees. Others say that the company continued operation until 1927, because there are trace of it having headquarters in New York, 71 Fifth Ave, when it went off market by its incapacity to adapt its production to the era of the colored celluloid pens. It seems[1] that in 1924 there was a first instance of failure (whose causes seem to be specifically tied if not for a strike to serious problems of labor relations), which was followed by an attempt to reorganize the company with a re-foundation and a different location from the original in order to avoid debtor lawsuits. This was unsuccessful, leading a few years later to the final bankruptcy.