From FountainPen
(Redirected from SAFIS)
Jump to: navigation, search
This page is a translated version of the page SAFIS and the translation is 100% complete.

The SAFIS origins have not been very clear for a long time and its place in the market with various brand names that refer to this company has been uncertain. But recent findings have found documentary references that a company with the name 'Società Anonima Pennini King", holder of the The King trademark, was founded in Turin, June 23, 1926, and further evidence shows that it was later forced to change its name in "Società Anonima Fabbrica Italiana Stilografiche", as a result of the pressure given by the policy of names Italianisation imposed by the fascist regime.

The company is one of the best Italian fountain pens manufacturers, with models with anything to envy in terms of quality of workmanship and beauty of celluloid, to those produced by other first tier brands. The initial production was made under the The King brand, which was partially maintained in the following years, when the company, after the name change, produced its fountain pens under a variety of different trademark, among which Radius and Astura. The company had its best period between the 30s and 40s and ceased production in the late 50s, (but an exact date is not known).

The SAFIS origins have been unclear for long time. Older texts referred that SAFIS (which stands for "Società Anonima Fabbrica Italiana Stilografiche") was established by a not better known Mr. Lattes in Turin, remaining active between 30s and 50s in Via Ormea. Recent findings in the Turin Chamber of Commerce records, reported that the company was founded in Turin, June 23, 1926, under the name "Società Anonima Pennini King". The The King trademark was then registered by the same company November, 8 1926 (see File:The-King-Trademark.pdf). 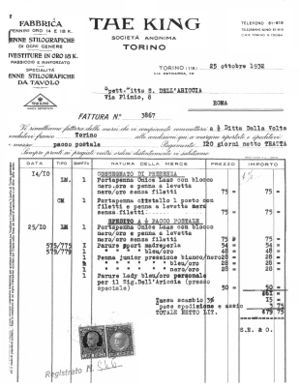 Another recorded information is the name of the company as "The King Società Anonima Torino" noted on the recently found invoice reported by side, which testifies to its continuing at least until 1932, although the seat, Via Petrarca 10,[1] is not the same quoted above, although a few blocks away. The same name appears in a catalog of this company ("Società Anonima The King Torino") found at OMAS archives.[2]

Today you can say without a doubt that the origin of the brand is the one that leads back to the The King production and next to SAFIS. This was already what appeared to be from some oral testimony,[3] where the transition would take place with the enactment of laws for the Italianisation of names promulgated by the fascist regime. In fact, the Radius brand (Reg. Gen. N. 50489) was registered in 1934.

Also where there were no known specific traces of the name change, an ultimate proof of the coincidence of the two companies was obtained from the discovery of the "The King Superior" trademark registrastion (Reg. Gen. N. 38982) in 1928 by "Soc. Anonima Fabbrica Pennini King" and the renewal in 1946, with explicit reference to the previous record, on behalf of "Soc. An. Fabbrica Italiana Stilografiche". But Enrico de Muro found at the Turin Chamber of Commerce an official communication of the name change to SAFIS, approved by the shareholders' meeting on July 6, 1934. [4] For a long time one of the assumptions made about the origins of the brand The King had been to regard it as a production commissioned by the OMAS because of the similarity of some production, and the fact that the brand is mentioned as part of the products made ​​by the commission OMAS in the text "Stilografiche Omas dal 1925 ad oggi" published by the "Club Internazionale della Stilogragrafica A. Simoni". 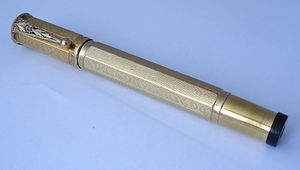 The later production were flat top models that as much of the Italian production of the time turn out to be clear imitations of the Parker Duofold. These models are still branded as The King Superior and produced in two sizes and five colors. Unlike Duofold there pens were equipped with an original twist filling system[5] which can be accessed by unscrewing the cap anyway. During this period the top model is the The King Diamond, featuring a cap with countersunk head decorated with a greek band.

This patent is a second point that bears witness of the presence, at least in early years, of a strong link with OMAS. The image of the filling mechanism used by these patented pens, present on the The King catalog found in the Omas archives and on this advertisement, is in fact identical to the one on an Armando Simoni patent (nº US-1784078), that in the French version appears to have been achieved in Italy in 1929. A further indication that somehow it was the OMAS to provide technology to the The King in the early years of this company. Around 1934 "The King Società Anonima Torino" was renamed in "Società Anonima Fabbrica Italiana Stilografiche", because of the policies of forced Italianisation of names carried out by the fascist regime, which made it unattractive to use an English name. It is not known when the first pens Radius appeared on the market, and at the moment the only certain date is that of the trade mark registration (Reg. Gen. N. 50489) which occurred in 1934 by the new company, which is why we take this year as its starting date. 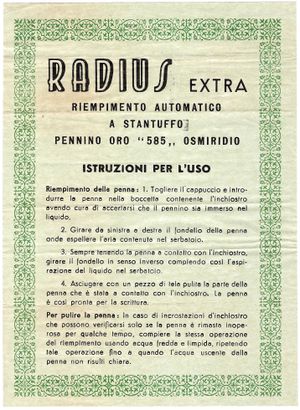 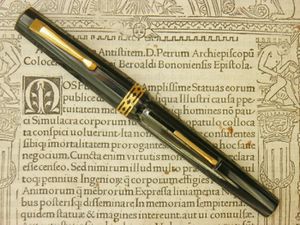 Astura brand production was instead purely dedicated to the economical level and saw an huge variety of diffeerent models made with the most different filling systems and the most varied forms, in a sort of trial both technical and stylistic. There is no known start date for this production, but the trademark was registered by SAFIS in 1936 (Reg. Gen. N. 54056).

Astura brand production of the '30s and '40s is extremely varied, with a production oriented towards economic pens with wide distribution, made in ​​numerous variants of finishes, shapes and colors. In the '50s, with the crisis caused by the advent of disposable ballpoint pens, were produced ever cheaper and low quality models. After WWII the restrictions imposed by the fascist regime ended and the brand The King was taken up by the SAFIS, and re-entered the market with the production of quality fountain pens, substantially equivalent to the simultaneous production of Radius brand, but did not reach the level of excellence achieved over the initials years. Postwar SAFIS activities seem to end in the second half of 50s, when the company was probably put out of business by the spread of disposable ballpoint pens. But there are no reliable documents about the cessation of the activity, the date of which is not precisely known, but it is certainly posterior to 1956 as the company appears in the "Annuario generale dell'industria e del prodotto italiano" of this year (see this excerpt).