From FountainPen
(Redirected from Levetta di fondo)
Jump to: navigation, search
This page is a translated version of the page Levetta di fondo and the translation is 100% complete.

The top lever filler is a particular lever filling system used by Aurora from around 1930 for the Internazionale model, and later also on the Novum. The first version of this filling system however, was used by Curzon for the Top Lever model (later renamed Debrett's) of 1926. Since the patent of the Top Lever' (nº GB-273357 and nº FR-628272 which is even more similar to the mechanism found on the Aurora) is from 1926, it is incorrect to attribute the invention of this system to the Aurora. There are no other known variants of the system used by other manufacturers except the switch filler of the Pilot, which has some similarities, in particular with the variant of this system adopted later on the Superna model. 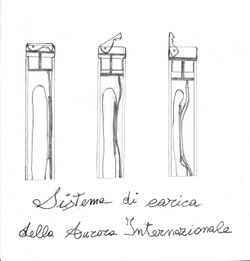 Diagram of a pen with top lever filler

In essence the bottom lever filler creates a sort of combination between the principle of the lever and the mechanism used in the button filler. In this case the lever is very short and positioned on a slot made on the bottom of the pen, the lever must be raised from its resting position, in which it is folded inside the bottom, and at that point pushing it further you go to operate an internal pressure bar similar to those used in the button filler, which arching compresses the sac.

The system is rather complex and delicate (given the small size of the lever the efforts to be applied are greater), and to avoid deforming the body of the pen Aurora inserted a reinforcement inside the same (made with a thin metal cylinder of aluminum inserted on the inner surface) that further reduces the space available for the sac.

The mechanism allows to avoid the presence of the blind cap of the button filler, and the related problems of loss, at the cost of a certain mechanical complexity. Its main purpose, apart from distinguishing itself from other manufacturers, however, it is mainly to aesthetically pleasing avoiding a gap on one side of the pen.

A variant of the system, also introduced by the Aurora with the Superna model, involves the mounting of the bottom lever in a vertical position; the lever is mounted inside an aluminium structure inserted in the bottom of the pen, which takes care to absorb the stresses. The lever emerges from a hemispherical shaped dome and can be operated by means of a plastic ball placed on the external end. In this case, the mechanism is accessed by unscrewing the bottom blind cap and charging the pen by pushing the lever through the ball.