From FountainPen
(Redirected from Montegrappa)
Jump to: navigation, search
This page is a translated version of the page Montegrappa and the translation is 100% complete.

Montegrappa contends to Tibaldi and Aurora for the primacy of being the first Italian fountain pens producer. Although the company is undoubtedly the oldest of three, it was founded as a manufacturer of nibs for fountain pens, whose production seems rather starting back to the early 20's. The company, along with Aurora and Omas is one of the longest living Italian producers, remained in operation until the present day. In 2001 the company was purchased by the Richemont group (the same owner of Montblanc) to be re-acquired at the end of 2009 by the Aquila family.

A Montegrappa in celluloid

The Montegrappa history is rather complex, the company was founded in 1912 in Bassano del Grappa with the name "Manifattura Pennini Oro per Stilografiche - The Elmo Pen"[1] by Edwige Hoffman and Heinrich Helm. It would therefore be more correct to refer to it with the Elmo name, used also for some models, since the use of the Montegrappa brand, with which it is now universally known, is much more late. Moreover, as the name testifies, the company initially produce only pens nibs, so it is at least arguable the claim to qualify itself as the first Italian manufacturer of fountain pens[2] since the production of the latter will not start until the beginning of the '20s.

The initial production of Montegrappa has been dated to the beginning of the '20s, they were hard rubber pens produced with both eyedropper of safety filling system. In this period were produced two different lines, the Elmo, a safety pen with a design very similar to the German production of the same time (with rounded cap and barrel end) and The Elmo Pen who instead imitated the style of american pens like Waterman 42, with flat cap and barrel end.

In 1922 the company acquired the building in Via Ca 'Erizzo in Bassano Veneto, later expanded and renovated, that still is the headquarter of the company. In 1925 the company was bought by Alessandro Marzotto and Domenico Manea, and the following year was renamed as "Industria Pennini Oro e Penne Stilografiche Elmo" which acronym, I.P.O.P.S.E., was marked on the nibs until the first half of the '30s. Despite the new ownership Heinrich Helm continued to be the production director, providing a vital contribution to the success of the company. 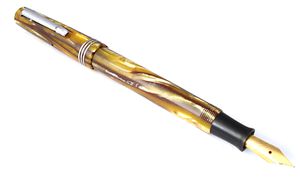 A Montegrappa in celluloid

Between the late '20s and early '30s were introduced the first celluloid models, the first ones were equipped with a button filler but later also a lever filler was used. Initially these were matched to the in hard rubber models and then they replaced them. Moreover the production was also differentiated, using the Elmo brand to mark the low end economic pens, while the Montegrappa brand was used for the top level pens.

In 1935 an interesting line of faceted pens was created, characterized by a great variety of celluloid colors. The style of these pens was the same as the other main Italian producers and resembled the Doric. In this series was also produced an original version made with wawed faces, one of the most interesting products from the company. In this same period began a further differentiation, at the Montegrappa brand was added the Montegrappa Extra brand, reserved for the most valuable pens, while in the low end to the Elmo was added the Ducale.

The '30s were a period of great activity for Montegrappa, which in addition to creating its own models, became a major production company for others brands, building pens for a wide variety of companies, more or less known. Among these Letizia Iacopini, in the book La storia della stilografica in Italia, reports: a.b.c., Aquila, Astoria, Atlantica, Caesar, Contessa, Dacis AVR, Domino, Duchessa, Montenero, Pilus, Titanus, Vulcan-Saturnia, Zenith. Excepted Domino for which is known a trademark registration (Reg. Gen. N. 32169) from 1925, the attribution for the others is quite uncertain; in particular Atlantica, Caesar, Contessa, Duchessa and Zenith are known to be owned by other companies, tough production on commission cannot be excluded.

In the late 30's, following the trend of the pens capable to show their ink level, Montegrappa started to use the piston filler and produced a new line of celluloid pens with a transparent section. Also in this period, the effects of the World War II began to be felt, and autarkic models, equipped with metal trim and chrome steel nibs, began to appear.

After the war, production resumed with a stylistic renewal of the entire production range, moving, as was the case for virtually all the Italian manufacturers, to tapered lines with a classic torpedo shape. The new pens were identified by a three digits numerical code, which meaning has not been fully clarified, excepted for the fact that the number of decimal indicated the filling system, and the unit the pen dimension (although without a ascending order). The hundreds digit usually stands for the model, but the same number was used for many different model, so its meaning is not clear.

In the postwar period were produced the 200, 300 e 400 series. In 1946 a fire partially destroyed the buildings, with some negative effects: the celluloid pens production was limited, and the Montegrappa focused in the production of metal overlays and in the use of injection plastic for pens. In 1947 the company was refounded as "Elmo - Montegrappa s.n.c." and in 1951 became the "Fabbrica Penne Stilografiche Elmo Montegrappa s.r.l.".

The production of the '50s saw the gradual replacement of celluloid with injection plastic models, celluloid remained used only for the economic production of pens in pearl or ivory colors, then widely used as a typical gift for the First Communion. During this period was also made the move to cartridge filler.

We are not aware of precise historical data for the period from the '60s to today; the company remained on the market, and in the 90s was noted as one of the best producers of silver or gold pens. In 2001 the company was purchased by the Richemont group (the same owner of Montblanc).